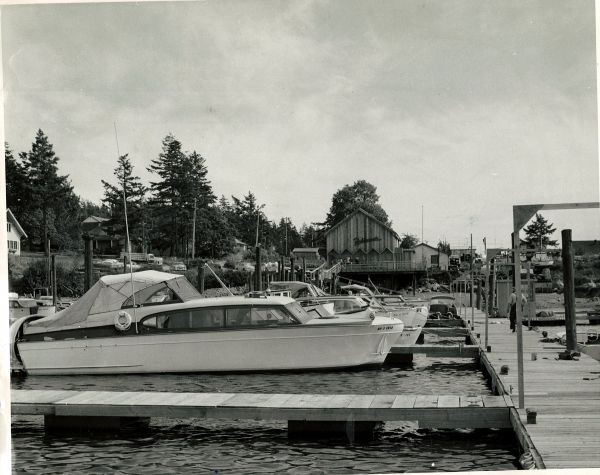 By Betty Carteret - Photos: Anacortes Museum and Port of Anacortes

On November 14, Trail Tales volunteers met with Port of Anacortes Director Bob Hyde, Project Manager Brady Rowe, and Facilities Services Manager Jenkins Dossen to tour the habitat mitigation project under construction at the site of the old Wyman's Marina on Guemes Channel. Wyman's Marina was originally known as Robinson's Marina, which is shown in the 1957 photo below. The marina was also a US Coast Guard mooring station at one time. Wyman's Marina operated until 1998 when two underground fuel storage tanks were removed.

The habitat restoration project is required to mitigate shoreline impacts resulting from the Pier 1 redevelopment work done for Dakota Creek Industries along Guemes Channel. The mitigation habitat compensates for loss of in-water habitat from bulkhead filling and dredging for the ship basin. The log pocket (aka log haulout) mitigation project was the next in line for the Port of Anacortes but is delayed due to permitting issues driven by contaminants found at that site. According to Bob Hyde, the Port felt that they needed to get moving on mitigating habitat loss, so they accelerated work on the Wyman project. 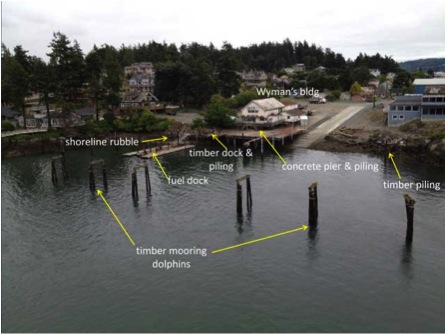 The project scope includes removing in-water and upland structures, excavation of the upland and intertidal areas to create a saltwater marsh habitat area. Up to 13,000 cubic yards of material will be excavated and the area regraded to create intertidal and saltmarsh habitats and a vegetated transition slope in the upper intertidal area. The project also will include providing public access to a viewing platform on the east side of the site with pedestrian access to U Street.

Work started on September 23 and is expected to be completed in early 2014. Funding for the project is provided by the Port of Anacortes, which received bids ranging from $1M to $2.2M for the work. The contractor is currently working on excavation and regrading. Work was delayed due to finding bedrock that has to be chiseled out of the excavation area. This is the same bedrock formation known as Bowman Point, the site of the hotel built by Amos Bowman in 1890 that burned down the following year. The boat ramp will remain in place as it is used to by marine services associated with the Ports operations on Guemes Channel.

Trail Tales will be working with the Port to develop signs related to this project and other marine industry activities along Guemes Channel as part of the extended grant that Friends of Skagit Beaches received from Ecology's Public Participation Grant Program.