Friends is in the midst of hosting our annual lecture series that continues to grow in popularity every year. This year the series kicked off with a presentation entitled “Research and Insights on Northwest Coast Humpback, Blue, and Gray Whales and their Incursions into the Salish Sea” by John Calambokidis from Cascadia Research Collective in Olympia, WA. A record of 290 people crowded into the Reid Harbor Room at the Northwest Educational Services District with standing room only and people spilling out into the doorways to catch the presentation. The lecture series team was quite surprised as the prior record was 162 people. Perhaps it’s a widening appreciation of the jokes delivered by our emcee, Matt Kerschbaum . . . on second thought it’s surely the excellent topics and speakers. We are so thankful for the amazing team of volunteers who put together this high-quality learning experience for our community. The lecture series project team is providing a great service for our community, which is obviously well-appreciated. 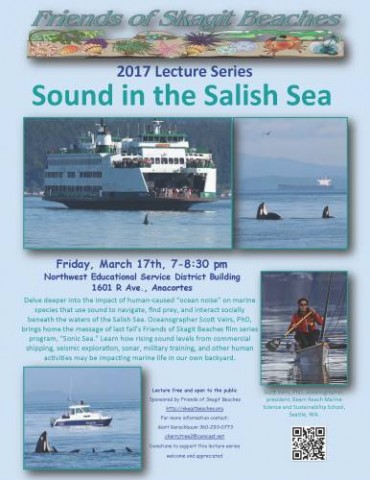 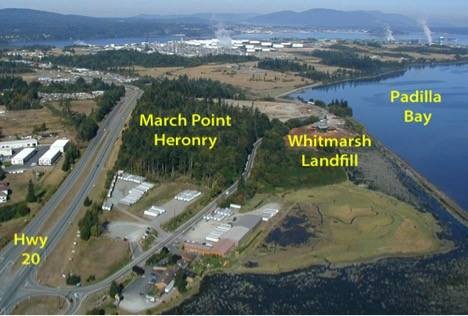 The current cleanup site being addressed under the Anacortes Baywide Cleanup program by the Washington Department of Ecology’s Toxics Cleanup Program (Ecology) is the March Point (aka Whitmarsh) Landfill site.  The site is located on the southwest shore of Padilla Bay in an area that was originally a marsh that was filled in and reinforced with rip rap during installation of the railroad line into Anacortes that now only travels as far as the Tesoro Refinery on March Point.

The landfill site is on the old county highway now South March Point Road, which was the main road into Anacortes and other points on Fidalgo Island until the 1950s. The nearby intersection with East March Point Road was once known as Whitmarsh Junction shown in this 1930s era photo with its tavern and gas station located near the current site of the T Bailey fabrication plant. 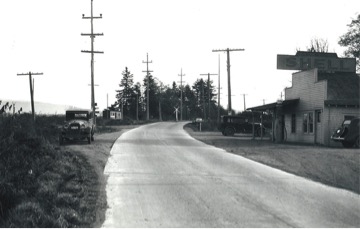 The cleanup of this former landfill site is being undertaken by Ecology in conjunction with “Potentially Liable Parties” who have been shown to bear potential responsibility for the contamination at the site.   They include Skagit County, which operated the landfill, Shell Oil Company and Texaco, Inc., Washington Department of Natural Resources (WA DNR), and several private parties who have ownership ties to the property, including the former owner of the Snow Mountain Sawmill closed in 2010. Ecology is also working closely with other stakeholders including the Swinomish Indian Nation and City of Anacortes in the evaluation and planning for the cleanup work.

This former landfill site has a long history of operating originally as an informal local garbage disposal site and later as an unregulated dump starting around 1950, which was taken over and run by Skagit County until 1973 when it was shut down. From 1961 – 1969 the county operated a burn dump and then converted it to a sanitary landfill that operated until 1973.  The site received household, commercial and industrial waste, which the county covered or “capped” in a manner that does not meet current environmental standards.

From 1980 to 2011 the Snow Mountain Sawmill operated at the north end of the site and added a thick layer or sawdust and wood waste on top of the old landfill.  In 2014, WA DNR completed the removal of 44,000 cubic yards of wood waste and sawdust from the site, which now transitions to the responsibility of Ecology and liable parties to complete remediation of the landfill.  In 2015, a 4-foot-high berm was constructed on the site to control erosion.

A Remedial Investigation Feasibility Study (RI/FS) was conducted by Ecology from 2008 to 2014 to investigate what was disposed at the site and where it is located in order to determine the nature of contaminants and their threat to human health and the environment.  Sampling was performed in several phases including soil sampling, groundwater and seepage sampling, sediment sampling, and surface water sampling. Additional studies included geophysical and geotechnical surveys, digging a test pit, a tidal study, landfill gas study, chemical analyses, and an archaeology study.  Not surprisingly as this was a landfill for residential waste, the largest amount of waste identified was metallic waste like disposed washing machines, scrap metal, metal siding, and 55 gallon drums.  Concern was alleviated about potential contaminants in drums when further investigation found those excavated to be empty. More concerning is the fact that soil samples were found to exceed allowed levels for metal contaminants including arsenic, copper, manganese, zinc, nickel, strontium, mercury, and lead.  Other toxins identified include PCBs, volatile organic compounds, and dioxins. A “fingerprinting” analysis was performed to determine the origin of dioxins found in the soil and surrounding sediments to try and identify the source in the upland watershed.

A path of drainage from highway 20 was mapped out and identified as the source of much of the contamination in the nearshore sediments.  The results of bioassay, chemical, and bio-accumulative testing of sediments from around the site found that there was no impact on the sediments of the lagoon or Padilla Bay from the landfill. In the area labeled Unit B below, it was found that the bio-accumulative carcinogen, Dioxin, exceeds safe levels and is most likely coming from other off-site sources. 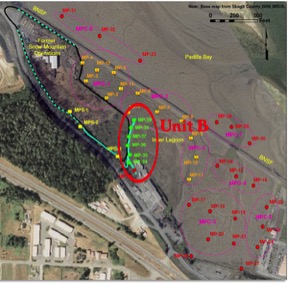 Armed with this information, Ecology developed a list of alternatives to evaluate as candidates for remediation of the site.  The alternatives that were investigated are listed below.

Habitat restoration is one of the factors included in determining an acceptable alternative.  Ecology is considering re-contouring the site along the inner lagoon, removing invasive blackberry vines, and hydroseeding with native backshore vegetation.  Ecology has consulted with the Skagit Land Trust about the March Point Heronry, which is across the road from the site, to determine what types of habitat restoration might benefit the Great Blue Herons that have over 500 nests in their colony.

Ecology performed a detailed evaluation of the options to compare feasibility, performance, risk, and cost for each option.  Although people may jump to the conclusion that the landfill should be completely removed as their first reaction, cost for value provided as compared to the risk posed to human health and the environment must be considered. After all, “we” the taxpayers are ultimately paying a significant portion of the cleanup cost.  With many sites across the state that need to be addressed, funding is limited and cost/benefit analysis plays a key role in the decision process.

Ecology is preparing the March Point Landfill RI/FS documents, including identification of a preferred alternative, for release to the public in early spring 2016.  The public is encouraged to review these documents either online or at the Anacortes Public Library and submit questions or provide comments to Ecology.  Notices of the public comment period will be published in local media and through the Friends of Skagit Beaches Trail Tales mailing list.  We will also post information links on our “Trail Tales Fidalgo Bay” Facebook page.  A summary of the schedule for completing the project is shown below.

For more information contact:  Arianne Fernandez, WA Ecology This email address is being protected from spambots. You need JavaScript enabled to view it.

Local contact:  Betty Carteret, Friends of Skagit Beaches This email address is being protected from spambots. You need JavaScript enabled to view it.

Washington Department of Ecology in partnership with the Port of Anacortes, City of Anacortes, Samish Indian Nation, Swinomish and other local Tribes, and private landowners is making great progress in cleaning up contaminated shoreline areas in Anacortes along Fidalgo Bay, Padilla Bay, and Guemes Channel.  This cleanup work is bringing new life and energizing the economy of the Anacortes waterfront removing a legacy of toxic contamination from old mills, marinas, and waste sites.

The Anacortes Baywide Cleanup is the project that brings together cleanup work at the following sites under the State’s Puget Sound Initiative.  Projects are funded by a combination of sources including the Puget Sound Initiative, Model Toxics Control Act tax revenue, liable parties (corporations, businesses, governmental agencies, individual landowners), and grants.  Below is a summary of the status of cleanup work at these site and some links to other articles about the work.

For more information contact:  Arianne Fernandez, WA Ecology at This email address is being protected from spambots. You need JavaScript enabled to view it.

[1] Remedial Investigation and Feasibility Study determines how much and where contamination is located along with evaluating cleanup alternatives.
[2] NFA – request for No Further Action which may include removal from Ecology’s Hazardous Sites list.

The 2014 Fidalgo Shoreline Academy was a big success on February 5th with 90 attendees, up 20 from last year!  We hope those of you who attended enjoyed the day and were inspired by the many educational presentations and walks.  Our keynote speaker, Dr. Deborah Kelley wowed the audience with an amazing presentation on deep sea volcanoes and vents with amazing photos and videos.  She even brought some samples of volcanic rock from the ocean floor for us to see and feel.

Sorry you missed it or can't wait to learn more? You can learn more about the UW Interactive Oceans program that she is involved with and you can learn more about her research with Dr. John Delaney, our keynote speaker in 2012, on their research vessel the "Thomas Thompson" at the University of Washington's Interactive Oceans website.  We're hoping to line up a visit for Friends members and volunteers to their ship when it comes to port.  You can view the 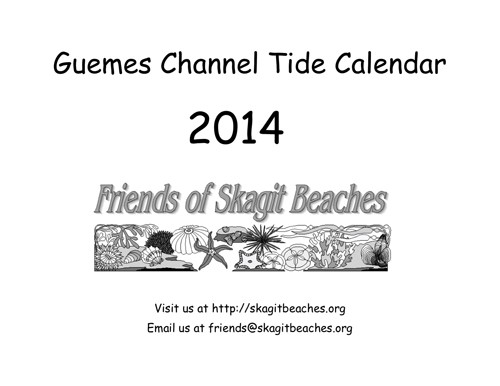 Planning to walk on the beach, to take your boat out on a day cruise, or wondering when the next low tide is to visit your favorite tide pool? Our new Guemes Channel tide calendar is just what you need to check out the upcoming tides and plan your adventures. Help support Friends by purchasing one or more tide calendars for you and your friends. This 12-month calendar includes fun facts and detailed tide charts in a monthly calendar style. Contact us at This email address is being protected from spambots. You need JavaScript enabled to view it. or call (360) 293-7003 to order your calendars today while our supply lasts.