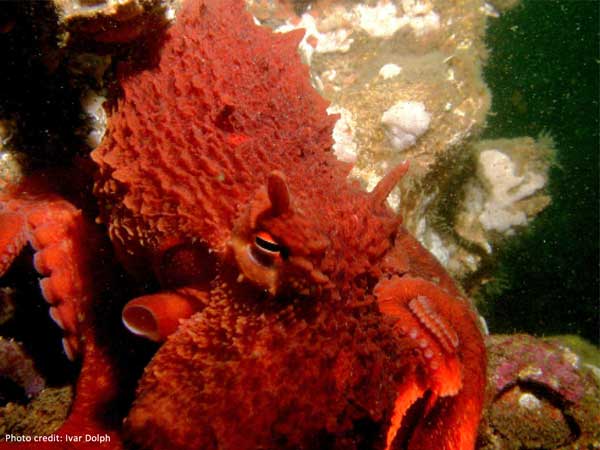 The Giant Pacific Octopus is the largest of the world's 300 octopus species. This eight-armed relative of clams and snails lives in rocky crevices and caves along the West Coast. It's in Puget Sound too. Although there have been much bigger ones, a full-grown Giant Pacific Octopus spreads its arms 14 feet and may weigh 100 pounds.

Of all the world's creatures without backbones, octopuses are probably the smartest. They figure out mazes, unscrew jar lids to get food, and recognize human individuals. Because its parrot-like beak is the only hard part of an octopus' body, it can squeeze through small spaces to escape predators. If that's not enough, the octopus emits a cloud of ink that both hides it and interferes with its enemy's sense of smell.

When hungry, the Giant Pacific Octopus hunts crabs. With the almost 2,000 suction cups on its legs, the octopus grabs the crab, bites with its beak and injects a paralyzing chemical to start digesting the prey. If a predator happens along, the octopus instantly camouflages itself, changing color and skin texture to match its background.

It may seem strange for such a large animal, but the Giant Pacific Octopus lives a short life. Females lay as many as 100,000 tiny eggs, often attaching them to the ceiling of a watery cave. They care for them there, never eating, and die once the eggs hatch. Both females and males live 5 years or less.

With luck, you may see a young octopus in a tidepool or along a rocky shore. They can give a painful bite so don't touch. Just feel fortunate to spot one of the Pacific coast's most amazing creatures.