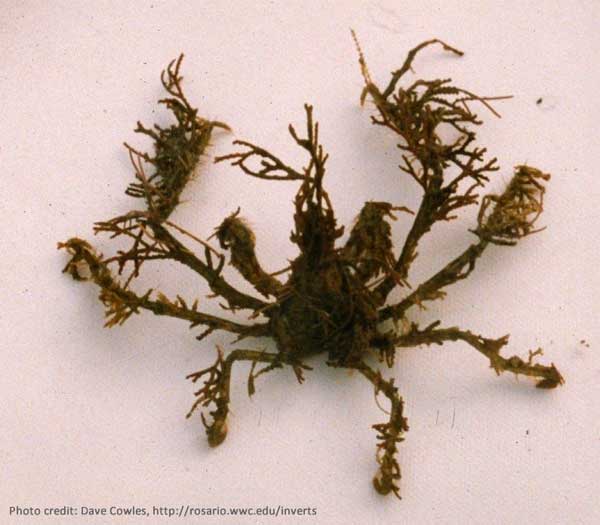 Could that thing moving in the tidepool really be a rock covered with seaweed? More likely it’s the little crab that camouflages itself by decorating its shell. Just an inch and a half long, the Decorator Crab uses its jointed legs to snag bits of sea weed, sponges, anemones and other things living around it. The crab places each living organism on its shell where specialized hairs work like Velcro to hook each item in place. Once attached, the collected plants and animals keep growing and hide the crab from predators. For extra protection, it can decorate even its sides and claws and blend perfectly into the tidepool scene.

Just as with other crabs, the body of the Decorator Crab grows, but its hard outer shell does not. So from time to time, the crab "molts," cracking its shell open at the back and slipping out. While a new shell forms and hardens the crab stays out of sight. Once that's done, it recycles the living things from its old shell by attaching them to the new one. Then off the Decorator Crab goes, blending in with its surroundings once more.

The population of Decorator Crabs isn't in danger; but oil spills and run-off of pesticides and other chemicals from the land endanger the crabs' habitat. As stewards of the oceans, we must carefully dispose of hazardous materials like these or, better yet, use environmentally safe products instead.