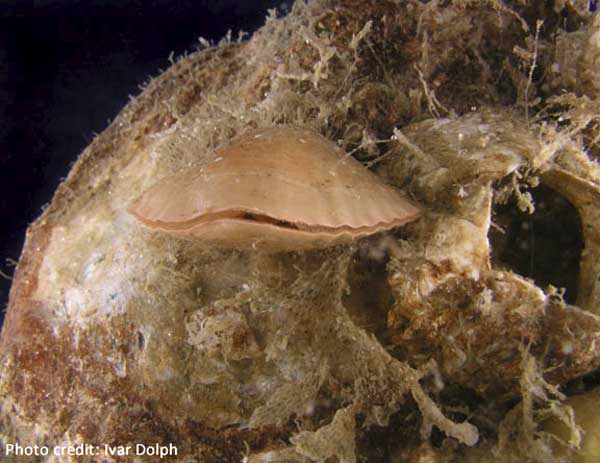 Look closely under rocks at low tide, and you may find one of Puget Sound's most ancient creatures. "Lampshell" is the common name for the Brachiopod living here. Many millions of years ago, thousands of Brachiopod species inhabited earth's oceans. Now we know most only from fossils. The one Brachiopod we're likely to see gets its common name from its resemblance to a tiny oil lamp.

Brachiopods look like little clams, but they’re completely unrelated. Their two shells differ from each other in size and shape. Bivalves, such as clams and mussels, usually have two equal shells and a different type of symmetry. And unlike bivalves, a stalk permanently anchors the Lampshell to a solid surface.

The Lampshell and other Brachiopods are filter feeders like clams, but they filter differently. Opening their shells a crack, the Brachiopod draws in water. Inside are two coiled arms with hundreds of tiny tentacles. Fine hairs lining the tentacles trap microscopic food and move it towards the animal's stomach.

Some creatures eat Lampshells. Sea stars use their tube feet to pull the shells apart. Crabs pinch chips from the shell edges and get at the soft body inside.

Like most filter feeders these small, long-lived, and ancient creatures are threatened by pollution. After millions of years will the little Lampshell go out?