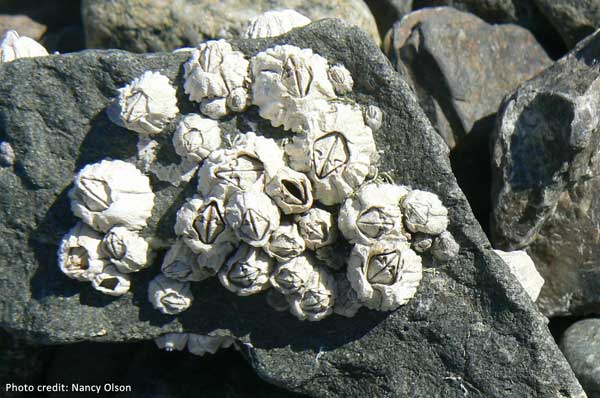 Learn a bit about barnacles, and you'll never take them for granted again. At the beach, those hard, white or brown little cones stuck to rocks and driftwood are alive but closed tight, waiting for the tide to return.

Though they look very different, barnacles are relatives of shrimp and crabs. After spending their first weeks as microscopic larvae drifting and eating, they drop to the bottom. They find a good spot and glue their heads to it! As the barnacles change into adults, each grows six hard plates that enclose it and valves to keep water in while the tide is out.

To see barnacles feeding, look in tide pools. With valves open, the barnacle's six feathery legs reach out and sweep the water for tiny bits of food. Gills on the legs are how barnacles breath, taking oxygen from the water and releasing carbon dioxide. Even with its impressive armor, barnacles are food for purple stars, snails called whelks, birds and other animals.

As you explore the beach, try to avoid stepping on barnacles, these amazing animals.