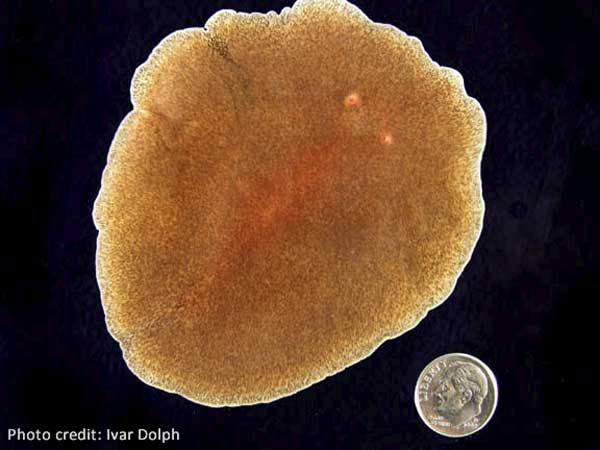 Unlike worms in your garden, Flatworms are oval, are not divided into segments, and are usually very small. But if you gently look under rocks at low tide, you may spot one of the larger types. Often a Flatworm matches the rock's color and is so thin it resembles a film. Look for something less than an inch long and a half-inch wide and usually tan with darker markings.

Until nightfall, flatworms stay under rocks to avoid the sun. They can't see but have tiny spots on top or along the edge to detect and avoid light. They're quite simple inside too, with no blood or circulatory system, a simple brain, and just two nerves. The Flatworm's mouth is beneath its body about half-way between the ends. Food comes in and waste goes out this single opening.

To move, Flatworms secrete slime and flow along on it by waving tiny hairs that cover their bodies. Larger flatworms are predators, and some use this slime to glue prey in place. As the Flatworm glides along, it passes over and swallows animals much smaller than itself. To eat larger prey, alive or dead, the worm flows onto it and excretes chemicals to soften it up. Once the prey is semi-liquid, the Flatworm can move it into its mouth.